Experience an unforgettable moment with a professional instructor in water sports and aquatic activities. Since 2011, Jean-Rémi has experience of Jet Ski trips in Saint-Barthélémy.

Your instructor will give you the necessary information to pilot your jet, enjoy in complete safety, discover the island from the ocean while respecting its environment.

Discover the practice of jetskiing in complete serenity for 45 minutes. The perfect formula for a new experience! Your initiation is accompanied by a guide.

Freedom is yours! Your guide guarantees you 60 minutes of speed and sensations. Enjoy yourself!

Whether you are an experienced sailor or a beginner, this trip is a good choice. Your instructor will supervise the sailing so you can simply enjoy your time, no stress!

Enjoy the full experience! Board your jet for a charming excursion and take a break in front of heavenly beaches. Adrenaline guaranteed!

From Lorient, the ride in a watercraft is supervised by the instructor who organizes his group in single file following a perpendicular trajectory in relation to the shore, at the regulated speed of 3 knots as indicated by the regulations in force. Beginning of the evolution at sea, passing in front of the beach Saint-Jean, direction the beach Flamands, discovery of this paradisiac bay during a stop beyond the band of the 300 meters. Resumption of the progression in the direction of Saint-Jean beach, second motor stop, observation of the coasts from the open sea in order to enjoy the landscape.

From Lorient, the trip in a motorised watercraft is supervised by the instructor who organises the group in single file following a perpendicular trajectory in relation to the shoreline, at the regulated speed of 3 knots as indicated by the regulations in force. Beginning of the progression at sea, passing in front of the Saint-Jean beach, towards the Flamands beach, discovery of this paradisiacal bay, resumption of the progression towards the Colombier beach by sailing off the shore without stopping in order to preserve the marine reserve, navigation outside the natural reserve then stop of the engines off the coasts outside the natural reserve. Return from the sea excursion to the bay of Saint-Jean, engine stop beyond the 300 metre strip, observation of this extraordinary place and explanation of its magnificent history, then return to the bay of Lorient by the same route.

Departure from Lorient, direction Saint-Jean beach, progression towards Flamands beach then Colombier beach by sailing off the shore without stopping in order to preserve the marine reserve, then continue towards Shell Beach, stop of the engines outside the 300 meters, then observation of this splendid beach, resumption of the progression towards Saline beach with a stop beyond the 300 meters band, Coco islet is visible around. Take advantage of a navigation towards the calm part of the island by continuing the guided hike towards Lorient by the same route, passing in front of the beach Colombier, Flamands, Saint-Jean.

Prepare yourself for an hour and a half of sensations where you will have the pleasure of sailing on different water surfaces depending on where you are! A calm stretch of water starting from Lorient, heading towards Saint-Jean from the coast with a stop at Flamands. Progression of the navigation while passing off the Colombier bay and stop of the engines at Shell Beach. The route becomes a little more sporty until Gouverneur, a short break for a few minutes. The trip continues towards Saline beach and then back along the wild coast, passing Grand Fond, Toiny, Grand Cul de Sac and back to Lorient. 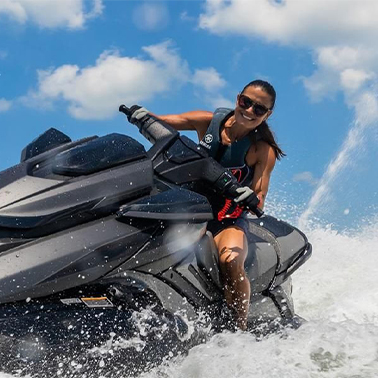 For any questions or reservations, contact Jean-Rémi, a qualified instructor.